Currently Texpad supports two methods of working with your Dropbox documents, with the older method of access to the Dropbox folder Apps/Texpad deprecated in favour of the native iOS Files app support.

Since the release of iOS 11, it is now possible for cloud storage providers to write an iOS app that provides access to files in the storage to all other applications running on that iOS device. Texpad works well with this system, and our intention remains to stay fully compatible with Files app.

Currently & to the best of our observation, Dropbox provides partial support for Files app (users may link individual Dropbox files but not entire folders with Texpad). This means that Dropbox may no longer be a suitable choice for multi-file LaTeX projects in Texpad.

We strongly advise all users to consider moving to a storage service that supports file and folder access via the standard iOS Files app.

In summary, the lack of support for folders means that the following essential features of Texpad are not smoothly available fo Dropbox document when accessed via Files app,

Until full folder access is implemented by Dropbox via Files app, these feature will remain unavailable. The only way around them is for the use to individually link all subfiles and images (as well as the output PDF). Most users will find the process to be less than convenient and we therefore advise all our users to consider alternative options.

Please note that it is indeed technically possible to provide full folder access but it must be done by the storage providers, and cannot be implemented by Texpad on their behalf. There are many shiny examples of apps that have exemplary implementations as proof that this can be achieved. More details are covered at the accompanying article at apps/managing-documents/dropbox/deprecation .

Texpad will soon cease to support Dropbox within the app via this section.

Currently, Dropbox provides partial support for Files app and may no longer be a suitable choice for multi-file projects.

We strongly advise all users to consider moving to a storage service that supports file and folder access via the standard iOS Files app.

Before iOS 11, Texpad required an internal client to work properly with Dropbox. This will be removed in due course, but during the transition we are leaving the old internal Dropbox client in place.

The first time you start using Dropbox with Texpad, the app has to be linked with your Dropbox account. You can do so by tapping on ‘Linked with Dropbox’ in the Settings’ pane, or by accessing the Dropbox section in the Files pane. 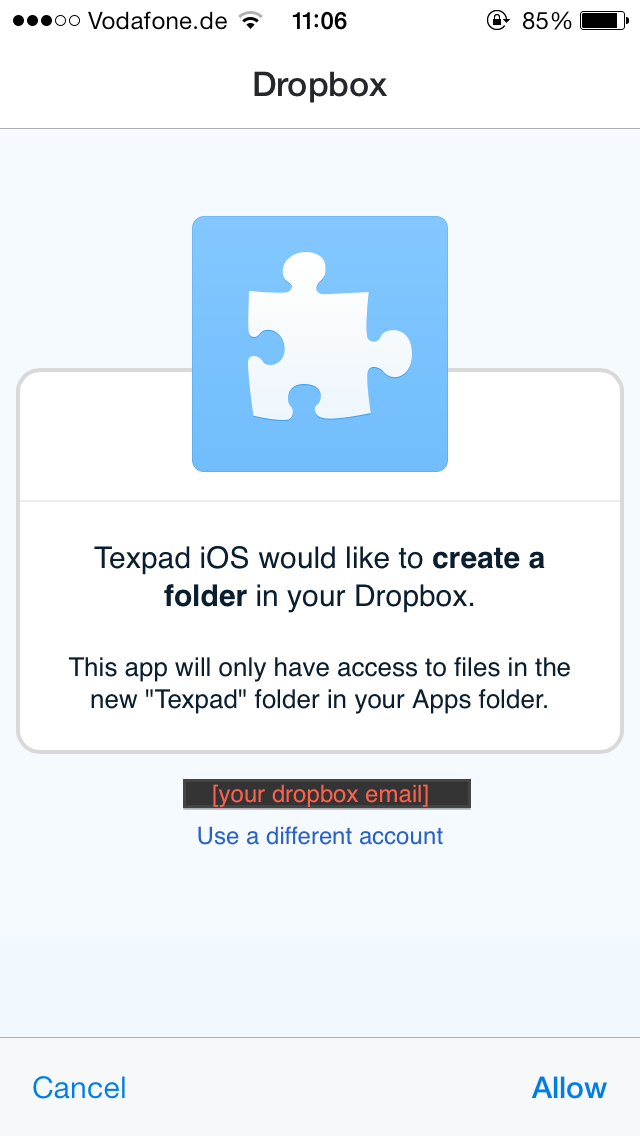 Select Allow in the bottom right hand corner to authorise Texpad to access files in your Apps/Texpad folder,