Type a standard LaTeX command and a small window will appear next to the cursor with a list of possible completions, and information about the highlighted entry at the bottom of the autocomplete list. You can accept an autocomplete with the Tab key, and dismiss the autocomplete window with the Escape key. Up and down keys will change the selected autocomplete. You can disable autocomplete entirely with the Auto Completion option in the preferences window. 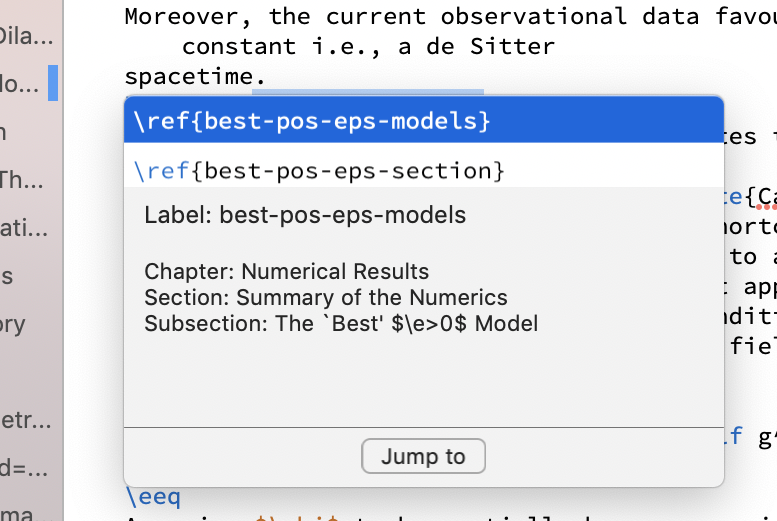 When typing commands with parameters such as \cite{}, \ref{} and \begin{}, Texifier will not only help complete the command itself, it will also fill the argument, known as autofill.

Texifier will parse any BibTeX or LaTeX files in your project, looking for \labels, \bibitems and .bib file entries. If you type one of the \ref{ family of commands Texifier will offer all known labels as possible completions.

Texifier knows many other autofills beside these, for example, it will autofill \bibliographystyle{ commands, \usepackage{ and \begin{ commands, amongst many others.

If you insert a \begin{ command from autocomplete and there is no matching \end{ command, Texifier will insert one. Texifier will also generate a matching

every time you press return on a line with

This behaviour can be enabled or disabled with the Automatch \begin with \end option in the Preferences window.

When you press return, Texifier will insert an equivalent amount of whitespace as there is at the beginning of the current line. This behaviour can be enabled or disabled with the Auto Indent option in the preferences window.

Custom Autocomplete commands are stored in the autocompleted_commands.txt file inside Texifier’s Application Support directory. You can open this file in Texifier by clicking the Add/Edit autocompleted commands… menu item in the Texifier menu. Once you have changed this file you must reboot Texifier for the changes to take effect.

This file consists of lines that are either a comment, and autocomplete command or an autofill identity. Their syntax is explained below.

The first non-whitespace character in the line should be a % symbol. E.g.

A line that describes a custom autocomplete. This consists of four parts, the first mandatory, the second, third and fourth optional.

The first entry should be the autocomplete key. For a regular command this should simply be the command without the preceding slash, e.g. for \documentclass write documentclass.

Autocompletes will always be sorted alphabetically, but some autocompletes are more commonly used than others and there may be one you wish to prioritise over others. To prioritise an autocomplete, prepend a stars to the key, the more stars, the higher the priority. For example to prioritise \documentstyle so that it is selected by default instead of \documentclass, add an entry beginning ***documentstyle. In the case of an autofill complete, place the stars after the colon.

To add a description, append a | character followed by the description. This description is presented to you in the autocomplete menu when typing the command in the editor.

Files it is defined in

To note the file the command has been defined in, write an @ character followed by a comma separated list of files.

Files it is redefined in

To note the files the command has been redefined in, write an @@ followed by a comma separated list of files.

An example of a simple \documentclass command with no description is

An example of an environment with a full description is

Texifier’s autocomplete is capable of leaving placeholders in the text. These show as blue badges, and when there are placeholders in the editor, pressing tab will jump between them. This accelerates inserting commands, and filling out the arguments.

To create custom placeholders, please add the command and any arguments as an E.g.. For example, a single placeholder can be inserted as follows.

And you can insert multiple placeholders the same way

This is useful if you have defined a custom referencing command. You could write

To comment an entire block of text, that is to say stop it appearing in the final document, then select the block and press Cmd-/ to comment it. Pressing Cmd-/ with the same block selected will uncomment.

If you have a block of text you wish to indent, then rather than pressing tab at the beginning of each individual line, select the entire block of text and press Cmd-] to indent it.

The indented string will be the same as your Tab key would indent. This can be configured in the preferences pane.

You can unindent in the same way with Cmd-[

The indent size may be customised using the Editor tab indent size option in the Editing Aids pane of the Preferences window. You can choose a tab or number of spaces in {1,2,4}.

Many LaTeX commands are used to create references to other parts of the document, for example \cite{}, \ref{} and \includegraphics{}, which reference bibliography entries, labels and image files respectively.

In these cases Texifier is capable of creating a short summary of the referenced entity, which is displayed in the Autocomplete window. It is also displayed over the editor if you place the cursor in the command and wait. For BibTeX entries, Texifier will display as many BibTeX keys as is practically possible, for Labels Texifier will attempt to display the context of the label (section title, etc.), and for images it will show a preview of the included image.

Since version 1.5, Texifier has supported Snippets functionality to make it easy to insert regularly used blocks of text into your document. Texifier is distributed with a small number of helpful Snippets, but the system is fully configurable. You may edit them and/or add your own.

To use a Snippet, either choose the Snippet from the dropdown menu, or press the associated hotkey – all hotkeys are activated with a control key.

All snippets are stored as text files in the Snippets subdirectory of Texifier’s Application Support directory. To open this directory, click the Add/Edit Snippets… option from the top of the Snippets menu.

To delete a snippet delete the file and it will be removed when Texifier is rebooted.

To rename a snippet, rename the file containing the snippet. The file extension is ignored, and will not form part of the snippet name.

To add a snippet, either copy the snippet file into the directory, or create a new file in that directory, with the name you want the snippet to carry.

The key is flattened. That is to say all whitespace, dashes and underscores are stripped and the entire key is rendered into lower case. For example Ctrl-Key, Ctrl key and ctrlkey are all equivalent keys.

If there is no right hand side to the line, then starting with the next line, all lines until the end of the file are used as the value.

Keys understood by Texifier are